Top Tailgating Games for Game Day or Any Day

School has started, the weather is getting cooler, and it is almost fall. For some people it’s just another season change, but for others it’s the beginning of the best time of the year – football season! Whether it’s a high school game under the lights on a Friday night, a college game at your alma mater on Saturday at mid-day, or a pro game on Sunday from the comfort of your recliner, almost everyone can relate to this season in some capacity.

Along with football season is another time of year all football buffs anticipate, tailgating season. Even the most indifferent football fan can get excited about game day if they know tailgating will be involved. Because who wouldn’t love a morning or afternoon of snacks, drinks, and outdoor games in near perfect weather?

Whether you actually do your tailgating from the tailgate of a truck or just find a grassy field or even set up in your own backyard, there are just some things that are needed to make a tailgate party complete. One of those things is some great yard games. There has always been a long list of yard games to participate in from croquet to bean bags to horseshoes. But there is a much shorter list of games that have become widely recognized among tailgaters across the country. You’ll find some of the most popular tailgating games for game day, or any day, below.

Bags is typically played with two teams, one on each side of the board. Teams can consist of 1-2 people. When playing with only one person per team, players need to walk back and forth between the boards after completing a round.

A large grassy area is usually best for this game as grass is more forgiving on the bean bags than concrete or other hard surfaces. The width of the play space can vary but needs enough room for the 2-foot-wide boards and space for a pitcher’s box where players stand to throw the bags.

Two platforms or boards and two sets of bags.

The boards or platforms are typically made of wood, but can also be made of a heavy plastic or other hard, durable material. Each board is 2 feet wide by 4 feet long. A 6-inch hole is positioned in the center of the board 9 inches from the top.

The two sets of bags each contain 4 bags. The sets come in two separate, identifiable colors to distinguish between teams. Regulation sized bags are 6 inches by 6 inches and weigh between 15-16 ounces. They are typically made of fabric that is double-seamed and filled with dried corn kernels or beans. 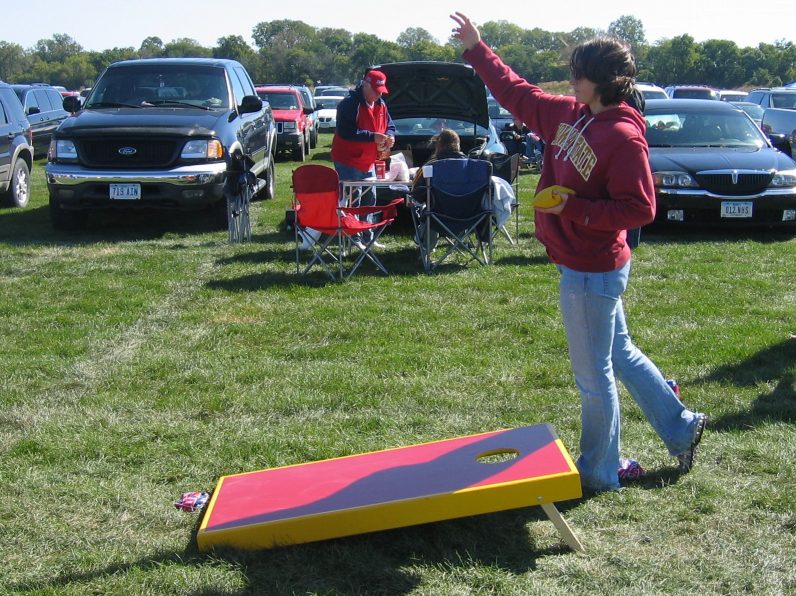 *For a complete list of rules and regulations you can visit the American Cornhole Association website at www.playcornhole.org.

Kan Jam is played with two teams. Each team consists of 2 players.

The court for playing Kan Jam should be 12-15 feet wide. The scoring containers should be placed 50 feet apart. The 50 feet is measured from the front of the cans.

One flying disc and two containers with open tops and slots for scoring.

Kan Jam sets are commercially made and can be bought online or in many sporting goods stores. The goals or “kans” are made of plastic and are simple to set up by rolling and inserting tabs on one end into holes on the other. 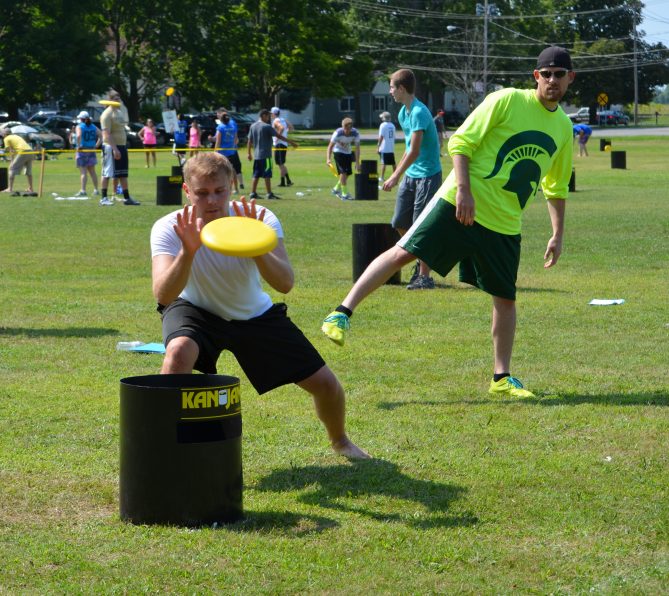 Game ladders should be placed 15 feet apart. For smaller yards or while tailgating with limited space, 5 paces is typically sufficient.

Two sets of 3 bolas. Bolas are two golf balls, spaced 13 inches apart, attached with a piece of nylon rope. Each set should be in a different color.

Two game ladders are also needed. Ladders can be purchased and assembled or you can build them yourself using PVC pipe. Each ladder is built on a base and consists of 3 steps, or rungs. Each rung is spaced 13 inches apart. 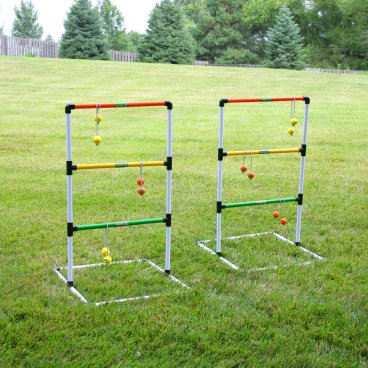 *For a more detailed set of rules visit laddergolf.com/pages/official-rules

Washer Toss can be played with 2-4 people, either 2 teams of 1 person each or 2 teams of 2 people each.

The area for play should include room for two 16” x 16” washer pits or boxes that are placed 25 feet apart from the center of the cups.

Two washer pits or boxes that measure 16 inches wide x 16 inches long x 4 inches tall. Each box has a cup that is 4 ½ inches in diameter and 5 inches high. Eight large washers that are approximately 2 inches in diameter. There should be two sets of 4 washers in distinguishable colors for opposing teams. 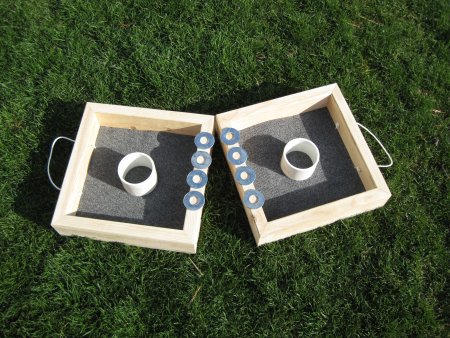 The court or area of play is 16 inches wide and 35 feet long. Players will need some extra width on either side of the poles to stand and have room to throw.

Flimsee Frisbee is almost always played in a grassy area as the required poles need to be stuck into the ground. Some commercially produced sets come with stands for indoor play or for playing in a parking lot during tailgating.

Four rods or sticks measuring approximately 55” tall. The sticks should be “flimsy” and lightweight so that they flex and bend easily. Plastic pipe or thin wooden dowels work well when making your own.

Play also requires 4 plastic cups such as red plastic drink cups. You will also need two 10” Frisbees or discs that weigh approximately 120 grams. Frisbees or discs can be purchased at most sporting goods stores. If you’re interested in playing more “official” Flimsee Frisbee there are several companies and websites that sell pre-made games with all of the equipment you’ll need included. 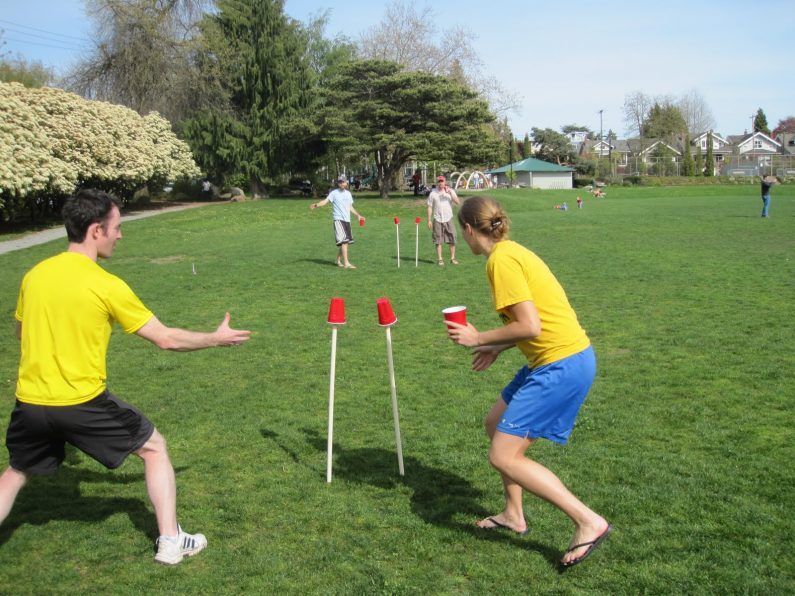 *For a more detailed set of rules visit www.flimsee.com/pages/how-to-play

While most people associate tailgating with rows of cars parked on a college campus starting early on a Saturday morning, this widely attended activity doesn’t have to require tickets or a drive to the game. In fact, it doesn’t even have to involve a tailgate. As long as you are surrounded by a few close friends, some of your favorite foods, and a couple of fun tailgating games, you can have a tailgate party in your own garage or backyard.

Simply grab the materials you need to create one of these games for yourself or visit one of the many websites and stores that manufacture and box these games with everything you need to play. Most also include a convenient carrying case so they can easily be carried to your next tailgate or backyard party.

Preparing Your Yard for Winter: Do’s and Don’ts